I researched Samaritan for two full months before joining. I went looking for all the reviews I could find, which is probably how you ended up on my site. Here are some of the favorite reviews I found, hopefully this list will help you as you decide about being a member. If you decide to join, tell them Heather Peters sent you. 🙂

@JamisonFaught said on Twitter: This is what @SamaritanMin looks like. ~55 families shared all of my emergency appendectomy costs. Praise the Lord! 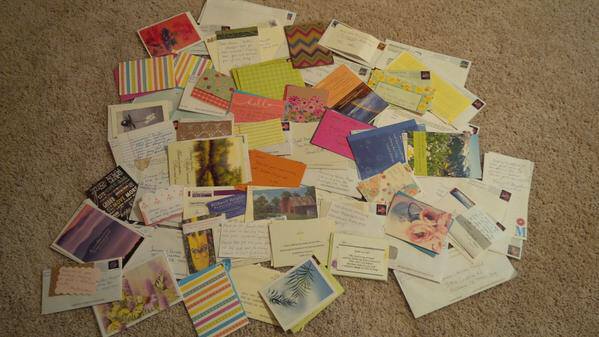 http://abundanceofpraise.blogspot.com/2014/09/rejoicing-in-hope.html – This one is amazing as it details the $300,000 need for their newborn, all paid for by Samaritan shares, and shows a picture of the 360+ cards/letters they got. So incredibly awesome!

Samaritan has videos of members (click to mysamaritanstory.org to see them) who have gone through various medical issues, some of them quite large, and each member gives their video testimony of how that journey was supported by Samaritan. I was struck by how significant some of these medical issues were, very big problems like heart issues, long term cancer treatments and more, and those members were fully supported financially and spiritually by Samaritan. I was also amazed at how almost all of them mentioned how important the personal interaction of sharing member to member became to them. It was clear that the notes, cards and prayers were just as important, maybe even more so, than the financial healing was. That is an aspect of Samaritan which just cannot be duplicated by insurance companies and I’m so happy to be a part of it.

The overwhelming theme from all the blogs, websites and forums I read was that members of Samaritan Ministries gushed their love for the program. During my research I could not find a single outright negative review by a member. I did find a few non-members who were skeptical, thought it must surely be false, and generally had no faith in it. But the message that really counts is the one from actual members who are really receiving money for their bills. These people were so thankful, so grateful, so blessed and most said they would never go back to regular health insurance. I even found a member who obtained military insurance and thus didn’t keep his Samaritan membership, but he pays $1/month to continue getting the monthly newsletter because he enjoys it so much and he continues to send money to members with Special Prayer Needs. The impact of being a member is so profound for many people they just can’t imagine leaving. That kind of review speaks very loudly to me. If the program was false or a problem or failing then I would have found people who weren’t happy. I couldn’t find them and I’m very very good at internet research.

At one point I thought I had found a negative review, but it turns out that while they said it was about Samaritan, it was actually about one of the other healthcare sharing ministries. So that put me back to zero negative reviews so far. Are there some? Statistics say there probably are, but it appears any that exist are very few and far between. I find that very comforting.

Are there any negatives about Samaritan? Well I suppose it depends on how you look at it. I wouldn’t call these negatives per se, but they are aspects to consider:

UPDATE: I found a member story who was disappointed that 4 families didn’t pay their share by the middle of the month as they are supposed to. It sounds like 3 of the 4 paid later in the month, and 1 didn’t pay and likely had to be reassigned. She is still happy being a member and recommended it. It highlights the importance of being able to cash flow the small monthly payments to our providers for those first couple months until all the shares come in. Even though our personal responsibility is only $300, we should still have a rainy day fund which can be touched while shares are coming in. Our family has a small medical savings fund to cover the non covered items like dental, and we can draw from that to pay hospitals a small good-faith amount until the shares from members come in. The huge monthly savings we have between Samaritan and our former insurance allows us to put a regular amount into that medical savings fund each month.

One thought on “Testimonials”

This website is a member review of Samaritan Ministries, a Christian Healthcare Sharing organization. I do not work for Samaritan, nor do I speak for them, I am just a very satisfied member. If you find this website helpful and decide to join I would appreciate if you would mention my name, Heather Peters (in Nebraska) or mention the website samaritan ministries review, as your referral. When that happens we then donate every month to special prayer needs and hope that you will consider donating something, too. Thank you for taking the time to read this site, it is a labor of love! :)

Exempt from the ACA

Members of recognized health care sharing ministries in existence since Dec 31, 1999 (this is) are exempt from the individual mandate of the Affordable Care Act, so there is no fine or penalty if you are a member of Samaritan Ministries.